It’s not just breeze through trees on Ocracoke,
it is the whisper of the gentle One
who only speaks when water parts the ways
away from home sweet home. 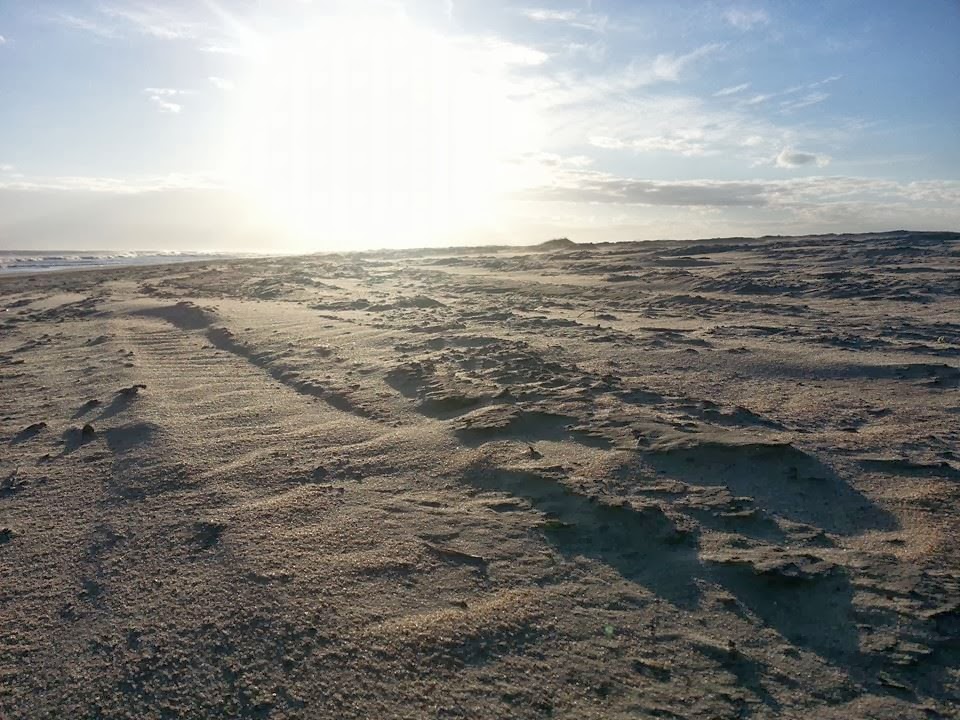 It is not wind!
Not leaves all moving at once!
As if osmosis needed tips to choral on this island beach.

No!
Stop naming actors the tree,
air and ear some symmetry,
giving brain
to all that stenciled canvas chair.

This singular sonata be troupe, troubadour, itself the play.
The voice of Trinity comes to Mind
both close and far away.
Infinity not some measly frequency,
transit inside time in line
to some sense of biology.

Entwined the ebb and flow of air
forms an allwords backwards-forwards,
a simple sounding hiss
serpents seldom say but certain ones alone.

This is elemental song of Earth,
from the mother we destroy with Nature named of conquest since the womb,
where we became and then quickly severed of the cord
to fill some twin bellows with air instead of breathing deep.

All of us, islands of God!


The Archetype of Mother,
and yet still my own Irene.
What is shushing that never ever stops?
Surely lullaby.

She speaks now as the Star plays on,
directly in the evernow to her lovely creation abandoned in the mirror dark
who longs for her even though she is not gone,
but simply not able to enfold innocence
like Mary doth blessed Grace bestowed.


And still the jealous, jaded Djin do pry herein.
Gravel grinds below, interrupts the flow,
car tires crush pebbles down to ground,
as if to steal the sacred sound
above singing in the trees
and on my level love through the stringed metal sieves
we call screens and do not see upon,
but only through.

Still protest
this serpent does,
staccato of the doors slams shut,
each invented guest
an effort to distract
rightful heir from noblesse. 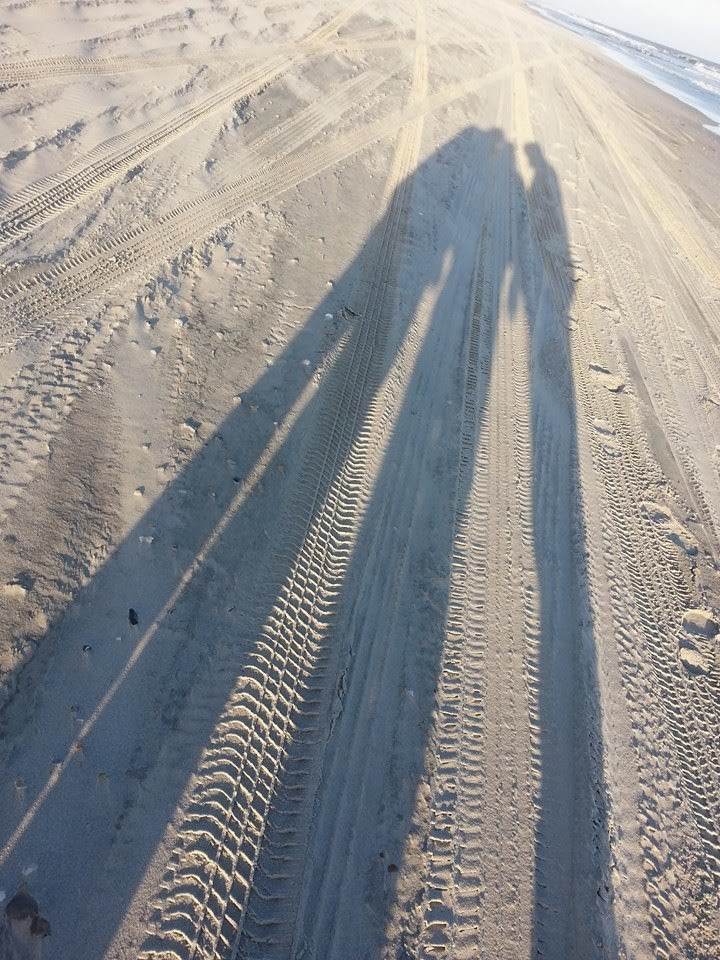 Fall longshadows under railings creep and upon my neck wrap dark fingers 'round,
but they cannot squeeze precious air from the apple of this Adam’s neck.
Forks make fingers of the dark but only out of light,
and out of the corner of my sight,
I realize this is no Setting Son.

Sophia
is this torch etched from Sol above,
who moves across the porch surely as he does a day,
warmshouldered I am prepared to say:
Too late, shadows!
I know walls from caves and acts so flat that are more close to mouth and flame.


Allegory or not, here I come!


With golden hues ablaze
She somehow says as sits still
the golden rays:

"The clock! A false device!
A paternal pimp to pass the time as excrement
and not take in as wine.

Silver rings these awful things
in schools in offices are hanged
to hypnotize, on walls in banks
and even multiplied on newsroom stalls
For its sweeping hands and charms
you must not ever fall.

At twelve it does not begin
nor does it end, for Omega and Alpha
no one numeral can ever be."

Twenty and four hours this Celestial transit
yet every wheel in history to just a dozen number gauged,
circled round the town a compass three and nine,
and doubled in your mind alone
with the two faces of twelve...

How they fear thirteen!


My God, the rising voice in just one gust of wind!
And an image comes to me
not on cavewall nor forestry with magic
or some brush never stroked.
I see, and I love her
and I cry.

Because where mermaid sang so swimmingly,
iridescent above the tree is one instant past the ugly hag,
and I have not abandoned her
for I know now her sacrifice radiates youth to me the same,
so I the beauty keep in Death
disguised as supple skin but not in vain.

“One secret, one perfect shell
on the sands Neptune’s pull shall not retrieve.

Know Thee child the face of time a magic spell,
an insult on the circle of the true and living Soul,
for sell they’ve stamped you through in Red,
for commercial trade you are bred
and they’ve covered Mari from the Time instead…
but see how their Laws nor admirals do not preside
when land is water put aside by Sound.”

Pamlico is her name.

“Hear me well now,” her imprint now communed goes on…
"all trees wave goodbye…
my seeds the last spell down, Dell shall not Ye bind, do not cry!
Must Ye your bretheren show be digital, unmasked
coordinated grid hath caged Spirit’s move in colon pair.
The revolution twenty-four,
Cosmos knows you are coming to the Door
and they can only fear.”

And she is gone.
Now itinerary.
Bullet points. Lists.
Lingering, one last pulse of prophesy...
as if persistence of vision came upon the wind in trees.
It ushers back through reeds, tall grass and varied leaves,
loud as daysound despite lonely haunt of hollownight,

in time to bell on Bay a lonely buoy away, she fades and sings:

"Do not ever fear
the end of time that is near…
but see it for its Word
Logos lives now among us All,
not in history
but next to you my dear.

Remember me
on the island you have found
and share the secret of its name
the longbeach village entropy
where mermaids bring my work
unto your artist’s ear
and pirates
lose their very heads
to protect the ocean blue above
from marauders
who call the mystic queer." 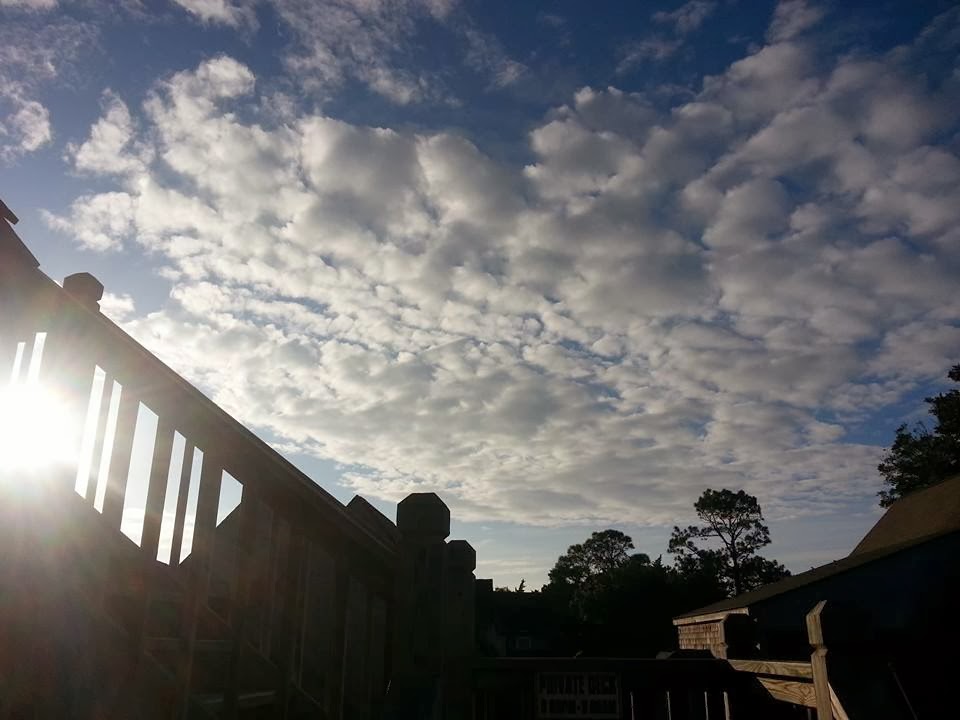 I wrote this on my smartphone while staying at the Inn and had shared it with the staff. The Innkeeper enjoyed my piece so much, that the last stanza (the one that sings through time and thus beyond her Cypress walls, thank you) is now permanently affixed within a frame to the Castle's walls so that others hearing the song of Convergence may relate. And my name in place below. As if now I am eternal guest. I am so honored and beyond joy - thank you so much Ronnie - for your love, your ear, and the gleam in your eye that refuses to ever dimmer down despite this World's candlesnuff ways. Sidra and Jude too, your support is effervescent as I gallivant the halls,  but I must confess now Ronnie has my poem"Sun is Yellow" handwritten on sketchpad paper so she is by default my number one fan. ;-)  Everyone else who remember child sojourns, please go to Ocracoke again, and stay at the magic Castle. Click the banner to visit their official site.

This day has no light in it
and it's as if the very hands
on all the clocks want no more
of the useless sweeping moves
to just point out coordinated reference
of where lies Epoch in its futile march;

as if the thumbtack centerclock
binding their fate 12 after 12 after 12 should a loosened screw not be,
but riveted in protest
to force Move out
and clearing Singularity.

Time's too heavy to carry Now.

Something's brewing up on deck,
I feel it in the anchor House!
All that holds below soon overboard
and the winds again
bring all burdens to Lagoon.

And that's too bad, really. How fun is it to say "chomsky?" What a fun marblegame bubblegum clown kiddytoy name!

The poor thing. All her sister wants is her shoes and her roadkill's still warm! What a witch!  Then, everyone sings dances and follows a stupid fat swirl on a lollipop the Devil licks dirty. All the time the road was a ribbon of horizontal highway peeking out from behind trees behind a Home Depot, midgets mushrooms, and all.

Noam, my heart is heavy for your Vincent deaf ear.

Know I heard you. Know I cared, and some icon of a college inspiration spirit still soars in my young graduate heart. And once a while, a kid listens and smiles, gets giddy, and hangs 'round professor doors. And Mrs. Robinson takes o'er.

Today I lived a decade in the passing of a few hours. There are Dominoes, there are cards, but in my magic world there is only irony and synchronicity, and the steadfast rudder of knowing who I am so fiercely it scares the crap out of delicate shadows posing as people bobbing like buoys in an angry sea. Thirteen. Sextet, sail on.

Well this'll be interesting... You know... like in the cartoons, all the funny beasty eyes blinking in the blackness the minute the light goes out?

Words! Around my eye a storm.

People will murder truth right this minute than to have to give it a glance in the mirror, and yet, await in such mournful hope for its blessed arrival somewhere down the road. Meanwhile....

Hideous vultures plucking innards from a carcass up the street, when once it ran free and beautiful.

Hating the waves of death staging now upon me,  as well as prickly history reminding me I am SO no that lamb away.

So, in a very small box it prompts:
What's on your mind?

Hmmmm. Maybe where I want to go today LOL. Sigh.