Pictures of People in the Hospital after the Bombs and Shooting 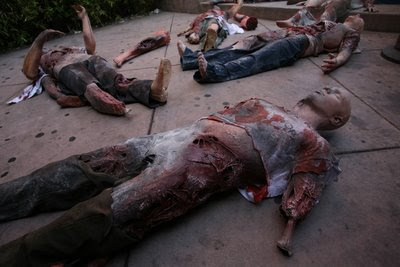 I'm going through my Health Plan's website. First, becuase it's such a rainy day anyway, I used the Physician Finder to find a really cute Primary Care physician at the new hospital facility nearby - that was awesome. But when I was reading through all my exclusions in my insurance contract, I found (more than) a couple of disturbing things.

Too bad for little ol' poor me. But thank you anyway, ROWR MD.

And two -- here's the kicker now -- if madmen or our even our very own ever attack our streets and invade our houses, when they bandage me up my bleeding from bricks and bombs at the hospital or medical tent -- I am not covered for the treatment! I gotta pay for geting hurt even if they aim right at me! From my medical plan's Master Agreement Exclusions section:

Limitations and exclusions
Unless specifically stated otherwise, no benefits will be provided for or on account of the following items: H211200

Any loss contributed to, or caused by:

What? ANY authority? Holy crap! What do they know is coming I don't? Welcome to the Land of the Free my friends. Apparently, where you're free to pay for war and getting shot in the ass during it too.